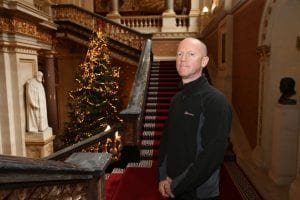 Family-run Sholach Christmas Trees was invited to provide the building with one of their trees, grown on the banks of Marlee Loch near Blairgowrie, after winning a competition.

Sholach is run by the McIntyre family and was established by William McIntyre more than 20 years ago.

William passed away in 2012 but two of his children, Kelly and Willie Jr, their mother, Jean, and Kelly’s son, Connall, work for the business.

Kelly, who also works as a professional photographer and videographer, said she was close to tears when she saw photos of our tree up and decorated in the Foreign office.

“It was a proud day for our family seeing our tree beautifully decorated in the office in London,” she said.

“It’s a tree our father planted and I know he would be proud of our achievements.”

It was Kelly who entered the “best short film” category of an annual competition run by the British Christmas Tree Growers Association.

“When I found out the BCTGA had a video competition, I knew I had no excuse not to enter,” she said.

“I’ve filmed and photographed around the farm for more than a decade.

“The difficult bit was making the Christmas tree film only two minutes long!”

When she found out the film had won, Kelly was “beyond ecstatic”.

“It’s such a great opportunity to share our story with people across the UK and further afield, promoting not only us but our beautiful bit of Perthshire.”

Back to News Articles